This living room has new paint and new flooring.

Have you ever gotten paint on the ceiling?  It happens.  There is a way to hide it.

My daughter has painted her room herself a couple of times.

There are a couple of lady bugs on the ceiling in the after picture.  🙂

If you don’t want to repaint the entire ceiling, touch up the ceiling with a stain blocking primer before you put on the new color.  I used Quick Dry Stain Blocking primer by Sherwin-Williams.  I also painted where the ceiling and the walls come together.  Will it match perfectly?  Most likely not.  However, the green, magenta and blue on the ceiling did not match either.  It was a solution that didn’t entail a lot of work.

The final color was Resolute Blue by Sherwin-Williams.

Add some shutters.  Plant some shrubs.  Paint the front door.  It makes all the difference.

This homeowner picked a color that complemented the current decor. 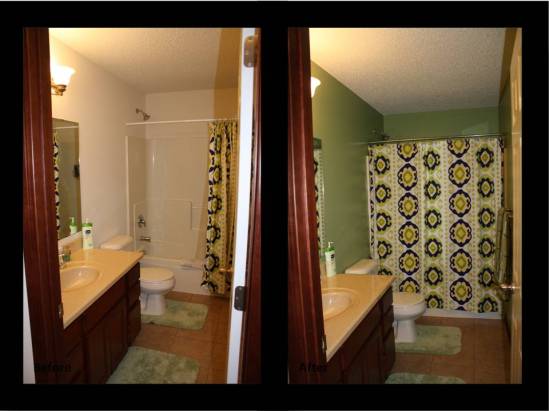 I also did a little sheetrock repair around the top of the shower.

A little paint & stain does wonders!

Paint the porch to match the trim.

This color was custom matched to the trim.  The staining of the floor and the steps cleaned up the front.

These bedrooms got a big change.

This is a dramatic change!  This homeowner chose the color Raisin by Sherwin-Williams.  It is a deep purple and it is gorgeous!!

The picture doesn’t do it justice.  It is so rich and elegant.  It is a color to seriously consider!

Color Makes Your House Your Home!